Detecting the Zerologon vulnerability in LogPoint

On August 11, 2020, Microsoft released a security advisory for CVE-2020-1472, with a CVSS score of 10, a critical privilege escalation flaw when an attacker establishes a vulnerable Netlogon secure channel connection to a domain controller, using the Netlogon Remote Protocol (MS-NRPC). What makes this flaw critical is that an unauthenticated adversary uses MS-NRPC to connect to a domain controller for obtaining Domain Admin access to exploit a vulnerability.

Secura, whose researcher discovered the vulnerability, released a blog that outlines the technical details of the flaw. The researcher stated that “the vulnerability stems from a flaw in a cryptographic authentication scheme used by the Netlogon Remote Protocol, which among other things, can be used to update computer passwords. This flaw allows attackers to impersonate any computer, including the domain controller itself, and execute remote procedure calls on their behalf.”

On September 14, 2020, the Cybersecurity and Infrastructure Security Agency (CISA) acknowledged the Zerologon vulnerability’s severity and issued a security advisory encouraging users and administrators to apply the necessary updates.

Furthermore, Microsoft released another advisory that details how to manage the changes in the Netlogon secure channel connections associated with CVE-2020-1472 after the patch installation.

To detect the abuse of the Zerologon vulnerability, look for the event ID 4742. To be specific, hunt for ANONYMOUS LOGON users, and SID in the event ID 4742 with the Password Last Set field changed. 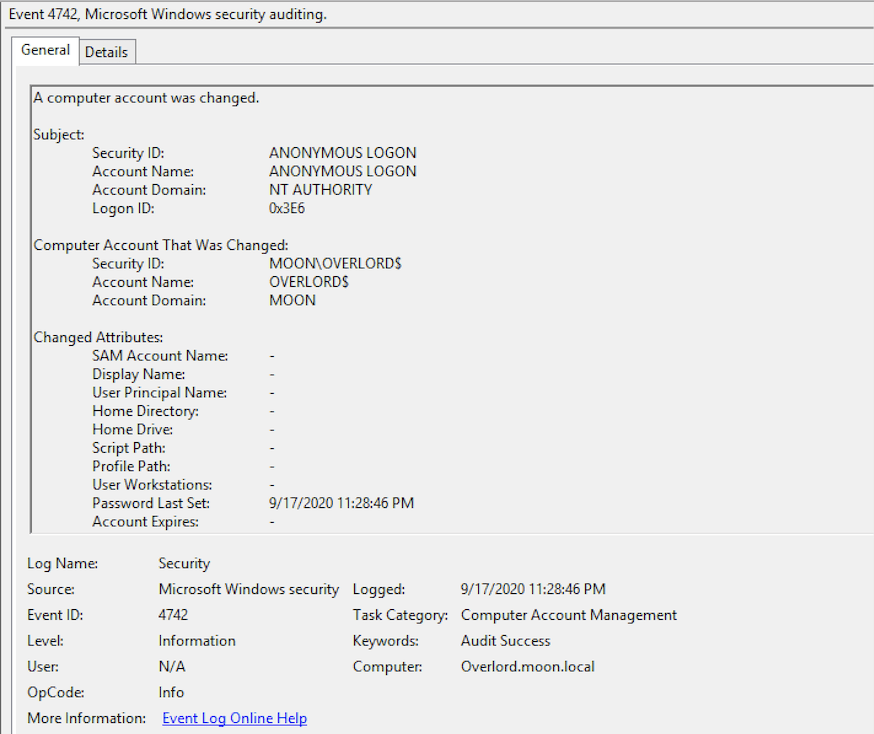 You can also look for account change-related activity of all domain controllers in the Active Directory.

Finally, unpatched systems are an attractive target for malicious actors. We advise that system administrators install the patch from August’s Patch Tuesday for all domain controllers to avoid compromise. As of now, Mimikatz is armed with Zerologon. Given the circumstance, it is crucial to monitor its activity in your environment.