A crowning achievement: Exploring the exploit of Royal ransomware

First observed in January 2022 and unlike any other ransomware we have covered, Royal is a private group with no known affiliations at this time. In another campaign, initial access is gained via “callback” phishing attacks. In this type of attack, the threat actors send an email containing a message to update a subscription of some kind and make the victim call the given number. When victims make a call mentioned in the mail, threat actors social engineered them to download and install their malware. A similar technique was previously used by the Conti group. The gang has been seen employing virtual hard disk (VHD) files that seem like legitimate software to speed up the transfer of first-stage payloads.

** Get research and analysis, insight, plus hints and tips, on how to detect, manage, and respond to Royal ransomware in the main blog.

First observed in January 2022 and unlike any other ransomware we have covered, Royal is a private group with no known affiliations at this time. However, Royal has been found deployed by threat actors DEV-0569. The group has been found using Google ads to redirect users to forums, posts, and blog comments, or sending phishing emails that contain links to download the malware. In another campaign, initial access is gained via “callback” phishing attacks. In this type of attack, the threat actors send an email containing a message to update a subscription of some kind and make the victim call the given number. When victims make a call mentioned in the mail, threat actors social engineered them to download and install their malware. A similar technique was previously used by the Conti group.

According to the U.S. Department of HHS, after gaining initial access and execution of their payload, the Cobalt Strike beacon is dropped in the victim system to maintain persistence, access credentials, and move laterally. The main ransomware payload uses a few command line arguments like “-id” and “-path.” Without using those command line arguments and corresponding values, it only performs system information discovery and inhibits system recovery by deleting all the shadow copies as a method of evading sandboxing and analysis. The third argument is ”-ep” and is not mandatory. The encrypted files are appended with the “.royal” file extension. While encrypting files it avoids encrypting specific folders and file types to prevent a system crash.

Below are the file types that are not encrypted by Royal.

Below are those folders whose sub-folders and files are not encrypted by the ransomware.

We have used multiple ransomware variants for our analysis to provide an all-encompassing detection and understanding. The samples we used were retrieved from MalwareBazaar and for reference, we also used samples from tria.ge sandboxes. We performed a static and dynamic analysis in our sandbox which is running Microsoft Windows 10 Enterprise. The outcomes of our analysis are explained below.

To execute the malware, currently, two things are mandatory: “-path” and “-id.” The path argument is for encrypting the specified directory and the “-id” argument is required for starting the encryption process and it should be a unique 32-character string. We have also observed the third argument “-ep” which seems to be optional for now and is used to determine the percentage of files that is to be encrypted. After analyzing the sample we have found out that if the command line arguments are missing or the parameter’s value is not correct, then it doesn’t perform encryption of files. We have also found the instance where Royal was querying the registry key “HKEY_LOCAL_MACHINE\SYSTEM\CurrentControlSet\Control\ComputerName\ActiveComputerName” to retrieve the system name.

Royal uses the GetIpAddrTable function to retrieve the IP address table from the local computer. It returns a list of IP addresses and their corresponding subnet masks and default gateways. To prevent system recovery, Royal has been using the vssadmin utility to delete all the available shadow copies without displaying any message.

While executing the malware we observed the malware spawning child process for running vssadmin to delete all shadow copies.

After freeing up the resources, the malware begins the encryption process. While viewing the events through ProcMon, we observed the following actions while a file was being encrypted.

Analysis of an older version of Royal 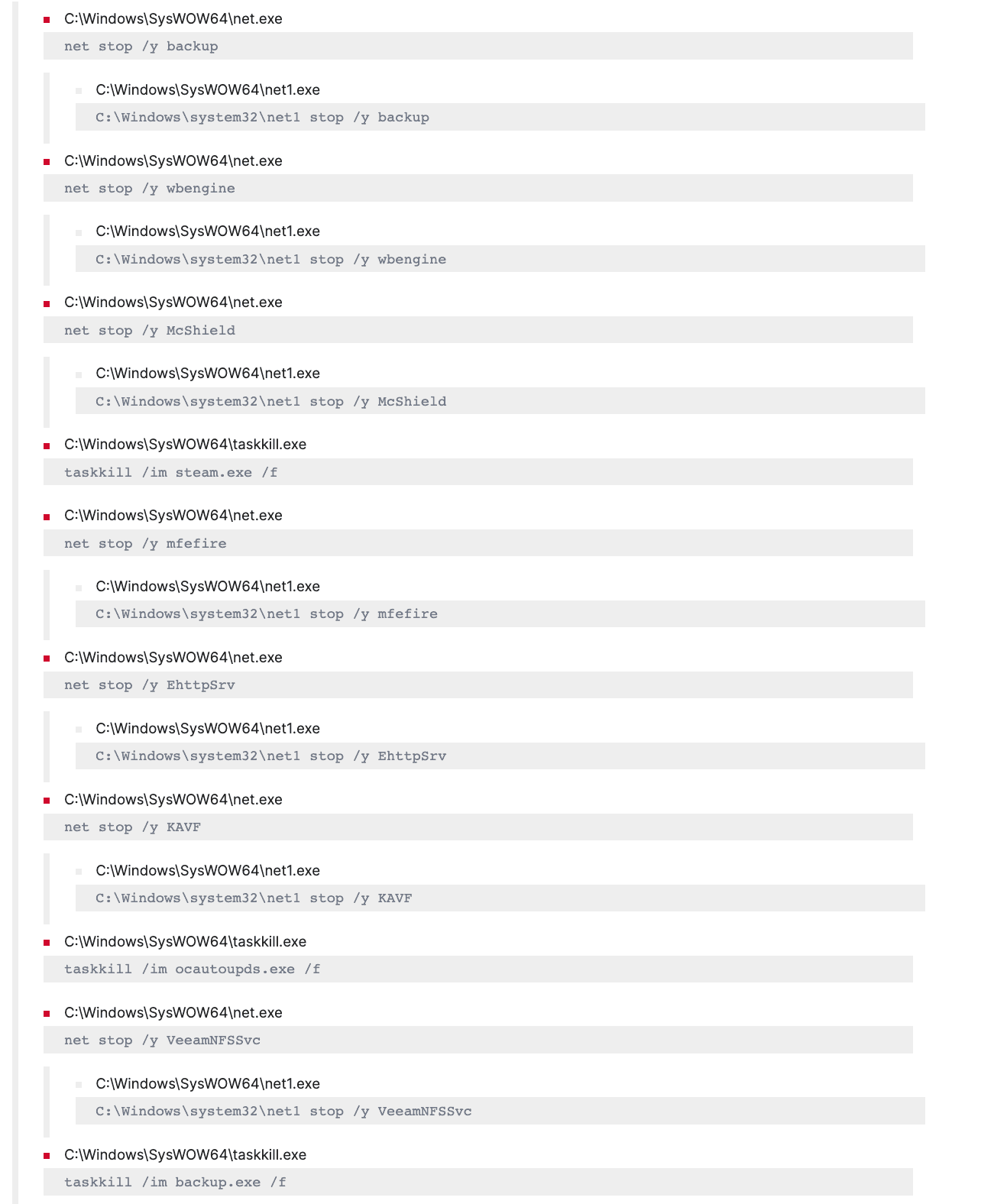 Then the malware attempts to create a scheduled task using schtask.exe with a random task name. In this case, Royal uses a binary masquerading as an image to evade detection. To overcome any failed attempt to schedule a task, the malware tries to schedule the task multiple times.

After scheduling the task, the malware uses the schtasks.exe binary to execute the task.

Then the below command is used to delete the file “pqBxGx.jpg.” The “/F” option forces the deletion of the file, even if it is read-only. The “/Q” option tells the command to delete the file without asking for confirmation. The “>> NUL” portion redirects the output of the command to the null device, which discards it and prevents it from being displayed on the screen.

As mentioned earlier, to set up the precondition for the ransomware to detonate, the malware stops many services and kills various processes. To detect such activity of Royal ransomware, analysts can use the below query.

Adversaries have used scheduled task functionality to facilitate for single or repetitive execution of malicious codes. Here, Royal ransomware has been seen to create a scheduled task to launch the ransomware. Thus, analysts need to look for the creation of scheduled tasks using the schtasks binary.

So, not just the creation of scheduled tasks, but events related to running of the scheduled task through schtasks should be monitored too.

According to the requirement, the number of events and time duration can be changed in the above query.

To prevent recovery of the drives, Royal has been found deleting the volume shadow copy of the drive using the vssadmin utility.

To detect the relevant logs, registry auditing for the RestartManager registry key needs to be enabled in sysmon.

High Volume of File Modification or Deletion in Short Span: The above image shows that the Python process has modified or deleted 20 files in a minute. Depending on the situation and the needs, the number of logs and the time range to trigger alerts can be modified. This alert detects a large number of file modifications or deletions in a short period so, it can detect file encryption activity by the ransomware.

The given alerts are available in Logpoint’s latest Alert Rules package and are available free for download for Logpoint customers.

There is no actual silver bullet for investigation and response to ransomware. However, Logpoint SOAR is by far the most useful tool for organizations to investigate and respond to ransomware attacks.

Endpoint detection and remediation with AgentX

Logpoint AgentX is a lightweight application that transports logs and telemetry from endpoints (all servers, workstations, and applications) to the SIEM, and performs automated real-time investigation and remediation of threats with SOAR. With AgentX, security analysts get precise detection of malicious malware and the ability to respond to threats in endpoints.

End-to-end detection, investigation, and response of Royal with Logpoint

Royal is a private group with no affiliates. Despite being a private group, Royal ransomware operators were able to leak the data of more than 60 victims on their leak site within a one-and-half-month period. This ransomware uses various tactics and techniques to achieve its end goals. For a faster encryption process, it uses partial encryption and other encryption options. As ransomware payloads are deployed in later stages, we can still detect them before they can encrypt an organization’s sensitive data. Through proper system logging and using the Logpoint Converged SIEM platform combining SIEM, SOAR, and endpoint response, we can detect the traces of the ransomware and investigate and respond to the malware’s activities.